If you have not yet tasted the heat and marvelous flavor of genuine Hatch Green Chiles, find some right now to experience in all their delicious splendor. My husband and I are pretty much addicted. Layered over chicken and fish? Absolutely. In eggs? Of course! On a sandwich? Heck yeah! If it’s savory, slather that stuff on there.

We were first introduced to these heaven-sent peppers last year by our friend and neighbor, Anaya Nieto, who’s art business (Nieto Fine Art) brings him to New Mexico on a regular basis. When the chiles are in season, he loads up as much as he can carry back with him on a plane. Thankfully, he’s generous enough to share with us. Even a four-pound bag lasts only a couple of weeks in our house.

Hatch green chiles are in such high demand in Southern California that Ralph’s publishes a calendar of which stores will stock it on which days and people come from all over to buy it. When I went to Albertson’s on Sunday, they had just received a batch. On instinct, I bought a bag full and it felt like I’d just won the lotto. I texted the uncles and Anaya that they were in stock and asked whether they wanted me to buy them some.

“We just bought 25 pounds of it yesterday,” uncle Jerry said. “We’ll bring you some tomorrow.”

“The store roasts them in the parking lot in a giant rotisserie barrel for customers,” he said.

Albertson’s did not have a giant roaster on-site. It was like buying any other produce item.

When Anaya responded, he said, “I just got back from Albuquerque with an ice chest full of roasted Hatch. I’ll drop some off.”

I asked him how I roast them.

“They do it for you in these giant roasting machines,” he said, then sent me this picture he took:

Given I did not have the same experience Jerry and Anaya did with buying them, today’s adventure was figuring out how to cook my Hatch green chiles. My goal was to get them as close to the two professionally roasted batches that we were given. (Rough problem, I know, when your friends and family are so awesome that they supply your addiction.)

After talking with Jerry and Anaya about the roasting process, I realized the challenge is in cooking the chile all the way through slowly. Simply browning the exterior layer so that it peels off won’t cook the chile itself. It’s a good thing we have a sous vide! 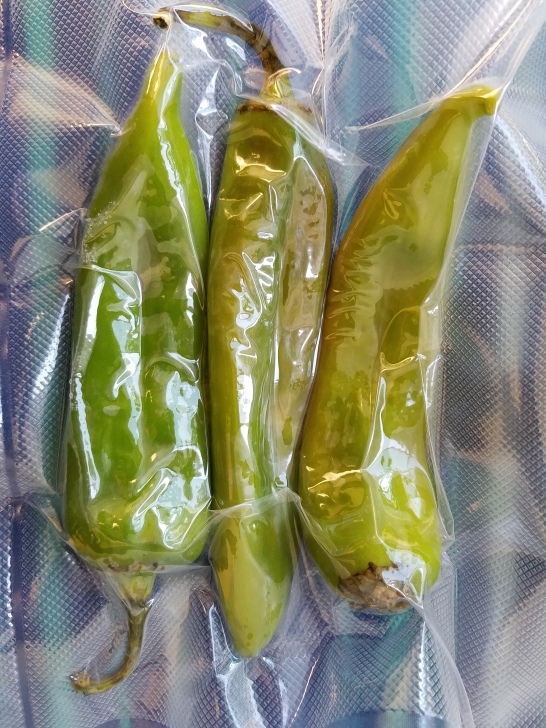 Vacuum sealed and ready for a hot bath.

I decided to cook three and test each one with different methods for browning the peel.

The first peeling method was on the stove-top and simply rotated it as it browned. I knew it was ready when it expanded like a balloon and then popped a seam along one side. Then I peeled, seeded and chopped it. 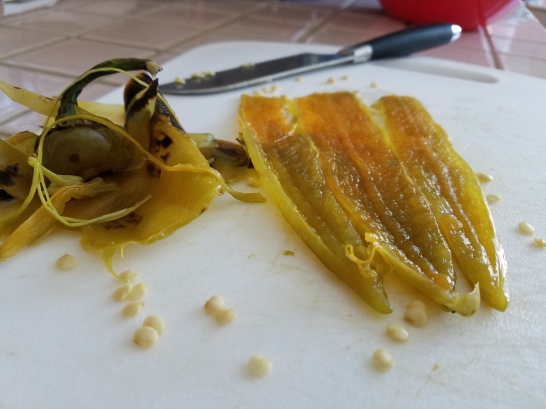 Browning the peel on a crepe pan.

The second method was broiling the chile in the oven. This was the easiest method and only required one flip. This was also peeled, seeded and chopped.

Broiling of the green chile on high.

Peeling and seeding the green chile.

The third method requiring borrowing the uncles’ BBQ since we don’t have one. This took the most effort and time overall, although it was probably the closest method to the formal, professional roasting.

Peeled and seeded after BBQ

Then came time for the taste test and comparison not only between the three, but also against Anaya’s batch from New Mexico.  Jerry was a good sport for agreeing to be a second, unbiased opinion.

All three from the sous vide were much sweeter than the New Mexico roasted batch. This was surprising, even though that’s an advertised result of sous vide style cooking. The spiciest of the four, by at least 4x, was the one done on the stove top pan. We couldn’t tell the difference between the oven broiled or the barbecued chiles, and in fact, we both agreed they tasted more like fruit. The New Mexico batch was in the middle of the spice range, and while the flavoring was still delicious, we preferred the added sweetness of the sous vide style. Jerry and I both love spicy food, so we voted the combination sous vide and stove-top as our favorite.

The good news is that I can still get delicious Hatch green chiles without needing them to come pre-roasted!