As a layer of Life Coach Training, Martha Beck, Inc. (MBI) offers all Cadets an opportunity to meet Martha and our Master Coach instructors over a weekend retreat in gorgeous Pismo Beach, Calif. My husband and I had been looking for a fun way to celebrate our birthdays and an excuse to head up the coast on a weekend adventure was the ideal way to do so. From the age of 21 on, we both had been living in the Bay Area, and Napa Valley was too close to justify ever going to Paso Robles for wine tasting. This also presented an opportunity to check off some more bucket list items.

We set out at 5 a.m. to beat LA traffic and were able to arrive in Santa Barbara just as the sun was rising. With a quick stop at the East Beach Grill, we enjoyed a ‘no frills’ breakfast of huevos rancheros and banana pancakes mere steps from the sand and waves.

Along our drive up the 101 freeway, we both needed a restroom and caffeine. Spying a cute little downtown area in Los Olivos, we figured there might be a spot to stop for coffee. I was amazed to see that each and every shop on both sides of the strip were all wine tasting. It’s certainly efficient if you’re hoping to hit more than three places in a day, however, it loses some of the charm of visiting a beautiful winery sitting amongst fields of vines and offering wine tours. After making our way onto side streets that contained more wine tasting rooms, we finally found the only place open at 9 a.m. and it was the happening place to be. Line out the door for coffee and pastries.

Having fueled up, we set back out on the 101 to find Firestone Winery, which was the first to open at 10 a.m. It was also a name brand we recognized out of all the Los Olivos wineries. While the winery building itself didn’t compare to the grandeur of Napa Valley wineries, the grounds themselves were quaintly pretty. I don’t believe I’ve ever had a Firestone wine before then, so this was a fun treat.

While the wines themselves weren’t my taste (a little too jammy and watered down for my bold preference), we did buy a few bottles for my mother-in-law and our uncles. We learned that our tasting room associate grew up in Pismo, so we asked her for recommendations on restaurants. Her favorites were Wooly’s Grill for the view, Old West Cinnamon Rolls for breakfast, and Ventana Grill for a nice dinner.

We made it to The Cliffs Resort in Pismo Beach by lunch and were pleasantly surprised to  learn that our room was ready and they’d allow us to check in early. While I didn’t pay for an upgraded room with a view, we sure had a beautiful one.

We set out to explore the facility. Visitors have the option of taking a small path down the cliff to the shore or walking along the path on the cliff.

After getting our fill of salty air and pelicans diving for fish, we headed 40 miles North East to Paso Robles to do some wine tasting. Our first stop was Opolo, which had been recommended by friends of ours who are wine club members. I hadn’t heard of it until their reference, and since had seen it a few times in our local wine shops. We shared a tasting, bought their Tempranillo, and shared a wood-fired pizza on their restaurant patio. I love this time of year when the Fall colors begin to show on the vines.

The only other winery I had heard of when perusing the map of the region was Justin, of which we greatly enjoy their Isosceles. Heading that direction, we let our whim choose the next winery, which was Whalebone Vineyard. (If you have recognized my obsession with whales, this should come as no surprise.) As soon as we stepped out of our car, we were greeted by a snorting and wiggling with joy bulldog named Bentley. (This was my kind of winery!)

Bentley led the way to the winery’s doors where two cats were also looking for some love in the way of petting and climbing up on my jacket for some snuggles. Once inside, we shared a tasting and asked how they came upon their name. When the owner originally began building the winery and planting the grapevines, he uncovered whale bones. The more they dug, the more whale bones and fossils they discovered. This came as a surprise given the elevation in the hills where this winery sits.

We also asked for a recommendation on one more winery to hit on our way up to Justin. The women pouring unanimously told us we should visit both Kiamie and Tolo Cellars, which are fifty feet away from each other and share the same parking lot. As compared to wineries I’ve visited before, they’re unassuming, which is usually the best kind. I like finding diamonds in the rough.

We tasted at both wineries, which also had loving dogs to pet, and enjoyed chatting with the enologist for each. As owners of boutique wineries, both wear many hats including wine room associate. I had asked what Tolo meant and he shared that it was Chumash for Mountain Lion. We learned that from Los Olivos all the way past Paso Robles was once all Chumash Indian land. 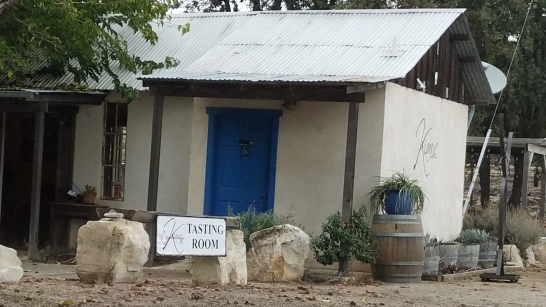 From there, we made our last winery stop at Justin. It reminded me more of Napa with its stately grounds and bustling tasting room. Our tasting room associate was fairly pretentious and we left with a strong preference for the previous wineries we had visited.

After a very long day of driving, we looked forward to returning to our hotel. Feeling hungry, we split a tuna melt and some cheese curds at Wooly’s Beach Bar & Grill while watching the sun set. Taking in the colors, my husband noticed some spouts of water. Sure enough, a pod of whales were gracefully coasting along. Not a bad way to end our first day of mini-vacation!

Early that morning, the hotel was buzzing with attendees for the MBI Retreat. I have heard many of their voices on our weekly class calls, though I knew none of their faces except Debra’s, who was my practice buddy. To hone our skills with coaching tools, MBI sets up practice groups. Debra and I were the only two from our group who made it to the retreat. I was so excited to hug her and see her in person.

As a cluster of 120 people in a small hallway outside the doors to conference room, the energy was visceral. We were excited to finally meet our fellow tribe members face to face and learn more from our instructors, who we were also meeting for the first time. For many in attendance, this was their first time seeing Martha in the flesh rather than on a video. I was first introduced to her teachings when she spoke at a Professional Business Women’s Conference that I had attended in 2008. I immediately bought her book Steering by Starlight. Then in 2009, I attended one of her retreats in Sedona, Ariz.

The day was full of insights, emotions, learning and experimenting. Some people bent spoons with love, one man was lifted into the air with only eight fingers belonging to four women, and others experienced lie-detector testing with merely arm strength. I’d go into it with detail, but it is just one of those things you have to experience to understand.

At the end of what was an energizing and spiritually uplifting day, my husband, Debra and I had a lovely dinner at Ventana Grill, where we experienced another stunning sunset while sipping wine at the bar waiting to be seated. We watched more whales and dolphins playing in the water before sitting down to enjoy our delicious pumpkin seed crusted sea bass and scallops with shrimp in a white cream sauce.

After dinner, we met back up with some of our classmates to perform a full moon ritual. In the same way the moon pulls the tides, given we are made up mostly of water, the moon also has a gravitational pull on our bodies. As such, on a full moon we release whatever it is from our lives and bodies we wish to release and let go of. (For a new moon, you set new intentions for the coming months.) Each of us wrote down what we wished to release…and one at a time, we dropped these notes into the bonfire and watched them burn and turn to ash as its smoke slowly danced into the air.

My husband and I woke before sunrise thanks to Daylight Savings time change. We took that opportunity to take photos of sunrise out on the cliffs. While overcast, we managed to snap pictures of the hundreds of dolphins who were searching for their breakfast in Morro Bay. Once the sun came up, we drove to Old West Cinnamon Rolls for our own breakfast. WOW – this place is really popular. For as quickly as someone inside would be served, people would add to the line outdoors.

They were pretty darn tasty. The bakery offers customers a choice of Original, Almond, Walnut, Raisin, Raisin & Walnut, Crumb and Frosted for about $3.50. You can add frosting to any of them for an additional $0.75. They also offer twists, which from what I gathered were merely a different form factor and gave an option of caramel instead of cream cheese frosting. I thoroughly enjoyed my Walnut with frosting cinnamon roll. 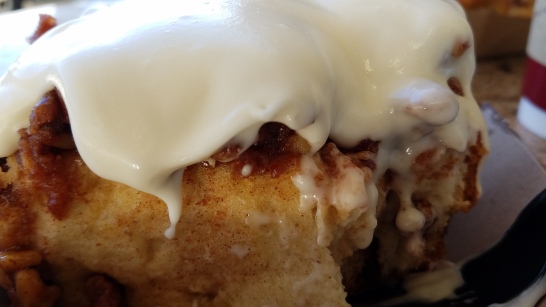 After breakfast, I attended the second day of our coaching retreat. We worked on more coaching tools and asked a variety of questions ranging from pragmatic to spiritual. I was sad to see it all come to an end, but like everything, we must continue down our own paths.

By 3 p.m. we were back on the road and by 7:30 p.m. we arrived in LA, where we dropped Debra at LAX and picked up our dog from my in-laws. It was a whirlwind weekend and I thoroughly enjoyed the mix of wine, food, camaraderie, learning, observing, beach, bonding, sunrises, sunsets, bonfires, whales and dolphins. My heart (and my stomach) is full.