So you’ve got a long layover in Panama City and want to know if you have enough time to see the Canal? If you have a cushion over three hours, you’re probably golden. Here are some tips based on our research and personal experience.

First off, if you’re from the U.S., everything in Panama is in $USD. So convenient! If you don’t already have an Uber app on your mobile, then download it and set up your account before you go because it will save you a boatload.

We had a seven hour layover at Tocumen Airport, which is 30-40 minutes each way to/from the Canal (ie: Miraflores Visitor Center). Watching a ship do a full transition from the Pacific Ocean to the Caribbean Sea took about an hour. If you have kids with you, they’ll enjoy some of the exhibits on bugs, birds and mammals that are native to Panama. There’s also a history exhibit where you can see footage of the engineering feat that is the building of the Panama Canal. In addition to watching the transfer live, there is an ~10 minute movie that plays every 10 minutes on rotation from doors opening (9AM) to doors closing (6 PM). Admission for non-Panama residents is $15 for Adults and $10 for Children.

When we were researching tours, we saw some upwards of $350 (that didn’t include entrance to the exhibit) although most were in the $65 per person ($130 for a couple) range. Essentially, the tour company takes a winding route from the airport to the Visitor Center, where they drop you off, wait for you, then drive you back to the airport. It’s advertised as three-hours, so I don’t know how much more winding they go than the route we took in an Uber.

When we exited the airport, taxi drivers were pitching rides to the Canal for $50 per person. Opening up our Uber app, we got an estimated fare at $32.50 flat. Uber it was! And we didn’t have to wait, there were plenty of drivers parked and waiting in the lot for someone to request a trip.

While our driver didn’t speak English, there was an option to pay $35 flat for a driver who did. We figured we’d manage with our limited Spanish skills and Google Translate. Our driver offered to stay and wait two hours for us if we paid him cash versus through the Uber app on the way back. He was happy to do that all for $30.

We arrived about 9:30 AM and as we entered, one of the ticket takers told us to rush up to the fourth floor deck because there was a ship about to enter the waterway. He also warned that there wouldn’t be another until the afternoon, which turned out not to be the case, but we’ll get to that later.

It was packed and challenging to find a pocket where we could see. My husband is 6-foot, 4-inches and he could see fine. I was trying to duck down to find holes between bodies to spy some of the canal and ship. My advice: If you find a spot against the railing – no matter where it is – take it and don’t move. We noticed some spots early on that were farther down the canal and knew it would take the ship forever to get there, so we followed the crowd and by the time we realized we should have stayed where we were, that area was jam-packed too. 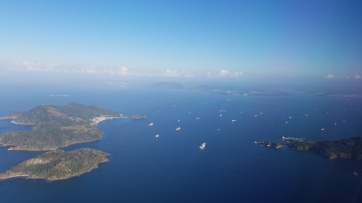 Ships lined up to enter the canal. 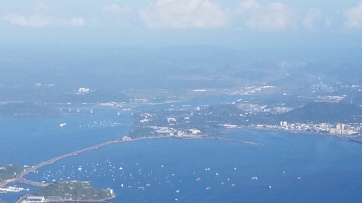 Arial view of the Panama Canal 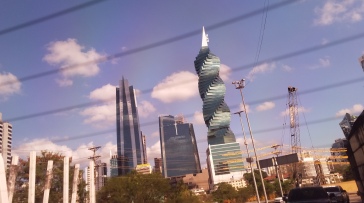 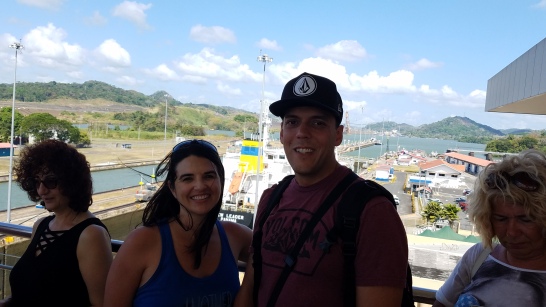 Found a pocket as the ship was making its way out of the canal. 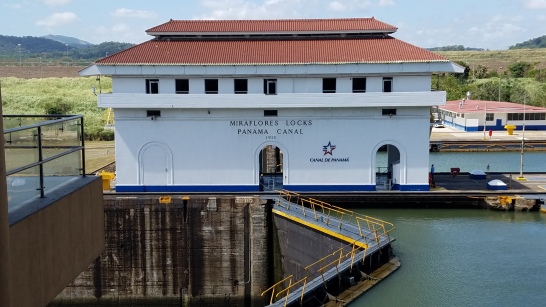 Admiring the engineering of the canal structure.

You can also view all of this from the bar and restaurant on the second floor, a fact that we didn’t realize until after the first ship passed. We stopped there for a few drinks and to admire the weather and birds, when we saw another ship pass through and it was prime seating! Barely anyone else was at the bar.

Fortuitously enough, the couple at the table next to us wearing Panama the Musical T-shirts, were locals. They had moved down from Canada ten years prior for the weather. He was formerly with the Pacific Symphony and, with his wife, decided to write and produce Panama the Musical, which is the only musical in Panama that’s in English. This gentleman gave us some interesting background on their issues with piracy in the area, due to the large amounts of cash the ships need to carry to make it through the canal.

According to him, cruise ships pay about $600,000 cash to go through, while cargo ships pay in the range of $100,000-150,000. Because it’s still all done in cash, and exchanged between officials guarded by men with machine guns, the ships themselves are targets farther out at sea. Who knew?

We were able to watch two ships pass through (one on each side), and tour the full facility in about two hours. From leaving the airport to returning, it only took us slightly over three hours. Granted, if we hit traffic that may have changed things, but well worth leaving the airport for. (Especially since until the new airport that is currently under construction is completed, the airport itself is fairly lacking in the way of restaurants, shops and lounges.)

The engineering and history alone is a site to behold. Although don’t go expecting quick action. It’s a slooooooowwwwwww process from one end to the other. One I wouldn’t have missed and so glad that we took this opportunity. If you get the chance and have a long layover, you should go, too!